West London born and bred, he has come a long way since his dysfunctional school days. discovered by Jamie Oliver at Fifteen, he now presents the BBC’s Junior Bake Off and will be appearing at The Cake and Bake Show in October. 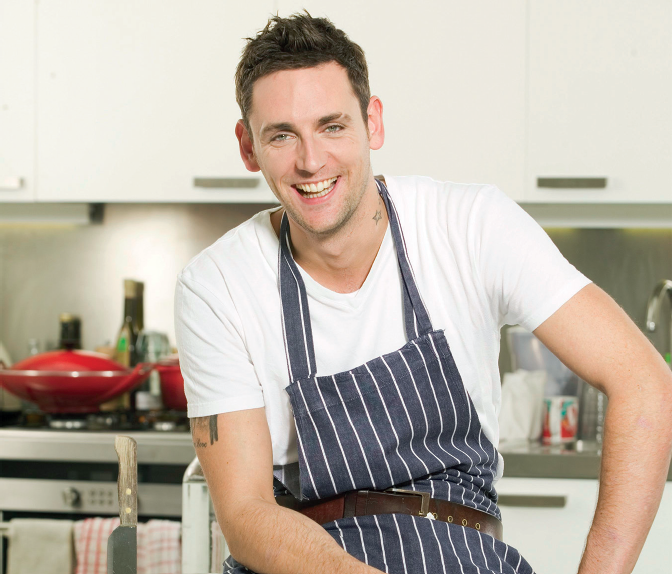 ABOUT SCHOOL
I wasn’t very good at school. I was talking to my daughters who love school and they asked what my last day was like, but I don’t think I even turned up! Because I have dyslexia, I couldn’t get on at school, they thought that I was being disruptive. I had a good time with my friends but academically I couldn’t do it.

ABOUT FIFTEEN
It changes you, you become more responsible, more punctual because you have to be on time and you have responsibility in the kitchen. You have to clean up as a person and become organised. It gave me a career where you can work anywhere in the world.

ABOUT JAMIE OLIVER
He has a lot of energy, he’s honest, and there’s never been a scandal with him. He’s a good guy, a hard worker and he cares about people and issues so he puts everything into it. He’s a person to look up to and a good role model.

ABOUT TV
If I hadn’t got into cooking I wouldn’t be doing tv. I have two different lives, and I’ve been around the world – I’m pretty lucky. I’m flying to the Philippines shortly to film The Amazing Food Challenge for the Asian Food Channel. It’s like Masterchef but with lots of adventure.

ABOUT WORKING WITH CHILDREN ON JUNIOR BAKE OFF
I have children so it’s easy for me. Kids have good imaginations and they always have something to say. When I was a kid no one
really did baking with us but now they just know what they’re doing. They’ve got their own recipes – it’s really impressive.

ABOUT WEEKENDS WITH HIS KIDS
We like to go for a bike ride by the river from Putney to Barnes or we’ll spend time with my sister and their cousin with a take away and movies. I’m away so much that I like just spending time with them and catching up.

ABOUT WEST LONDON EATING
I love to grab some Ochi at Shepherd’s bush with my daughters. If I was looking for a restaurant, I like Italian, so I’d go to La Famiglia in Chelsea.

ABOUT THE CAKE AND BAKE SHOW
I’m doing an interactive class, where I’m making Portuguese tarts; on the Live Stage I’ll be making a lemon curd tart, and I’m also doing a Masterclass for Cannoli and Chocolate Marquise.

Aaron has kindly shared one of his recipes with us. A cauliflower creme brulee probably wouldn’t be top of my list but got to be worth a go!