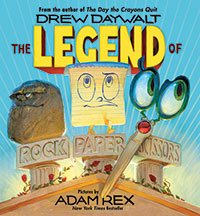 When the undefeated warrior, Rock, runs out of contestants to beat in the Kingdom of the Backgarden, he goes off in search of a suitable suitor. Elsewhere, Paper is the undisputed champion of the Empire of Mum’s Study but, unsatisfied by his easy wins, he leaves in search of more challenging foes. Over in the tiny village of the Junk Drawer, Scissors is making short work of her enemies and decides to find more interesting battles. When the trio stumble upon each other, the most epic battle ensues. 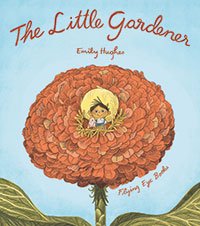 The Little Gardener by Emily Hughes (Flying Eye Books)
For those fond of nature, this sweet story is one full of hope. When the little gardener struggles to grow anything on his plot, he is close to giving up. But then, he sees signs of life in the form of a little flower, but that isn’t quite enough to rescue the barren patch – until he makes a wish and his life is completely transformed. Subtle yet deep, and set against a dark palette, Emily Hughes’s tale of persistence is also one that restores faith in human kindness. 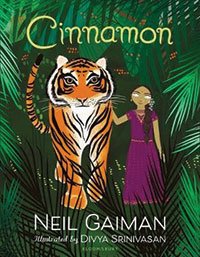 Cinnamon by Neil Gaiman with illustrations by Divya Srinivasan (Bloomsbury)
This stunningly depicted fable tells the tale of a princess called Cinnamon, whose eyes are made of pearl, meaning she is blind. Not only is she blind, but she doesn’t talk. Her parents, Rajah and Rani, are desperate to hear their daughter speak and offer a handsome reward to anyone who can make her talk. People travel from far and wide with little success, but it takes the skill of a tiger to unlock her voice. A beautiful, funny and poignant tale from a master storyteller. 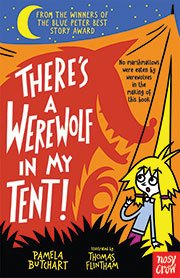 There’s a Werewolf in My Tent by Pamela Butchart illustrated by Thomas Flintham (Nosy Crow)
Pamela Butchart never disappoints and, in her latest book, the laughs come thick ’n fast. Izzy and her friends are excited about their school camping trip, until they find out that their new, super-strict P.E teacher, Miss Moon, will be in charge. Capers-a-plenty as four friends use all their skills to survive the trip in one piece; with howling heard in the night and the discovery that Miss Moon has really hairy legs – is she secretly a werewolf? And if she is, what on Earth are they going to do about it? 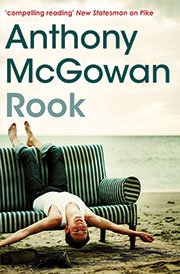 Rook
by Anthony McGowan (Barrington Stoke)
Rook is the third in a series (Brock and Pike predede this), but this novella easily stands alone. When brothers Nicky and Kenny rescue a rook after it’s been attacked by a sparrowhawk, they decide to nurse it back to life, but the boys have other worries to deal with. Interwoven into this beautifully written depiction of teen life are tips on how to avoid the school bully, as well as how to pluck up the courage to speak to a girl you like.
Barrington Stoke are experts in publishing fantastic stories, which are inclusive for all. They specialise in books for dyslexic and reluctant readers. 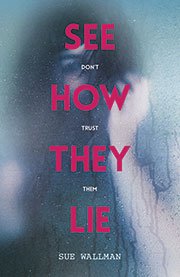 See How They Lie by Sue Wallman (Scholastic)
A gripping read set in Hummingbird Creek: an exclusive wellbeing retreat for troubled teens with psychiatric issues. The rules are strict, and woe-betide you break them, which is doubly difficult for Mae as her father is the founder. But, after an unintentional discovery, Mae begins to question her family life as it becomes apparent that all is far from what it seems… A real page-turning mystery, with enough sinister undertones to keep the suspense going.