A REVIEW OF THE BIG BAD FOX AND OTHER TALES

Coming next week to screens in the UK is The Big Bad Fox and Other Tales. It features a host of voices from the world of British comedy including Bill Bailey, Adrian Edmondson, Justin Edwards, Matthew Goode, Celia Imrie, Phill Jupitus and Giles New.

The film is divided into three tales: Baby Delivery where a lazy stork leaves the delivery of a baby in the care of a rabbit, a pig and a duck; The Big Bad Fox where Fox steals three eggs but unwittingly ends up adopting the chicks; and Saving Christmas where the animals embark on a hair-brained scheme to replace Father Christmas.

Each tale is beautifully crafted and the script flows along gently, generating laughs from grown ups and kids alike. And there aren’t many films that get 100% on Rotten Tomatoes. We were lucky to take the children to a screening at The Soho Hotel, but they had to earn their keep, and promised to write a review. To be honest, I was wondering if the old-fashioned appearance of the film would hold the attention of my Marvel-loving reviewers. But it did. And they really enjoyed it.

“The Big Bad Fox and Other Tales was a great film. All of the characters were funny and the drawings were amazing. My favourite characters were Fox because he was actually quite sweet, and Rabbit and Duck because they kept getting in trouble. I recommend this film for anyone, since everyone in the audience was laughing when we were watching it.” Isabel, 12.

“The Big Bad Fox and Other Tales is really good. I recommend you go watch it. My favourite tale was Baby Delivery because it was the funniest one of all. My favorout(sic) character was Duck because he acted really dumb and his ideas were funny.” Lucas, 9. 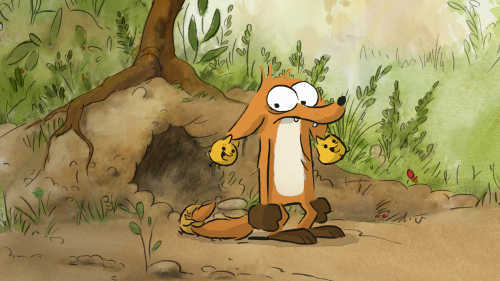 In cinemas 3rd August. Give it a go!