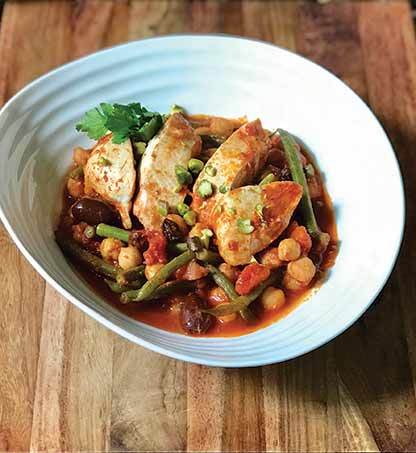 When time is short (that’s most of the time then!) and I want a home cooked, nutritious meal for all the family, this is often my go-to recipe. It uses accessible ingredients, is really quick to prep and involves minimal washing up. Furthermore, you can cook them immediately or leave them in your fridge to cook later which means you can cook them to suit the various comings and goings in your house.
I’ve given you the Moroccan inspired recipe here but there are numerous flavour combinations to suit your family’s tastes or ingredient availability (see PS at the end of the recipe). Now my children are a bit bigger, I’ll make four parcels from this recipe, but you might find you can get six parcels if you have smaller tummies to fill. Cook them all and put any leftovers in the freezer for heating up another day.
The parcels work very well as a complete meal in one – so there’s no need to make extra side dishes. That said, some couscous, pasta, rice or crusty bread are always a welcome addition.

Take four large pieces of grease proof paper or kitchen foil and fold each one in half to make it double thickness. Tightly fold together two of the edges to seal, creating a pouch, making sure there are no gaps for the food to escape when cooking. Secure the folds using a stapler if using greaseproof paper. Alternatively, buy baking/roasting bags from supermarkets that are ready to use and a real time saver.

Slice each chicken breast into 3-4 pieces and set aside.

In a large bowl, mix together all of the remaining ingredients, apart from the pistachios and coriander. Season with a little salt and pepper. Divide between the four parcels and put a sliced chicken breast into each one, pushing down into the sauce to cover. Seal the parcels by folding over the open top, or using an oven-proof tie or string, leaving some air in them for steam to circulate when cooking. The parcels are now ready to cook straight away or store in the fridge until required.

Put the parcels directly on top of the baking tray you’ve been heating in the oven, slightly spaced apart, and cook for 30 minutes. By now the chicken will be tender and juicy and the sauce thickened. When cooked, split open the parcels onto bowls/plates and serve scattered with pistachios and coriander

Be creative and switch the flavours around:

GREEK CHICKEN PARCELS swap the harissa for 2 tsp olive tapenade and switch the ground coriander for dried oregano. Serve scattered with some feta cheese and serve with bulgur wheat.

INDIAN CHICKEN PARCELS swap the harissa for 1 tbsp curry paste and omit the olives and pistachios. Scatter the top with flaked almonds and serve with some mango chutney and naan bread or rice.

ITALIAN CHICKEN PARCELS Omit the ginger, harissa, raisins, coriander and cinnamon and use 2 tbsp pesto, 2 chopped anchovies (optional), 1 tsp balsamic vinegar and a pinch of sugar instead. Serve with parmesan cheese and garlic bread or pasta.