Protests supporting the Black Lives Matter campaign have taken place worldwide and families have been getting involved too. We asked one parent to give an account of her experience of organising a family friendly protest. 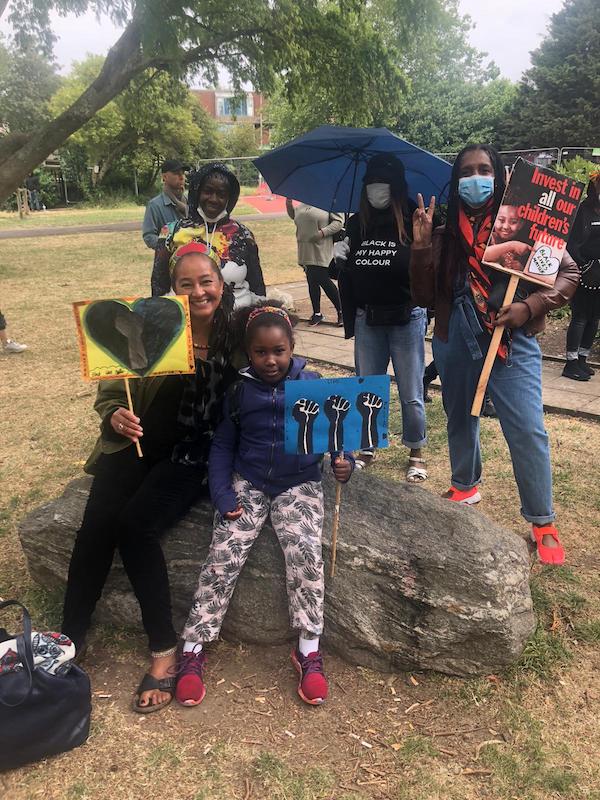 Sitting in our flat, in a terrace on the edge of Kilburn, with our baby and our three year old, we were trying to figure out what to do. Like many people, we’d been staring at our phones, watching the Black Lives Matter protests in America, watching events escalate and spill over into the rest of the world, and our own lives. We were trying to work out how we could get to the protests that were happening in the middle of the city.

Protests and marches are a type of activism that I truly believe in and we have taken our toddler to various big protests since she was a baby. But in lockdown it was different. We didn’t feel like we could get to the protests safely, and once we were there we weren’t sure we would be able to keep ourselves and our children at a safe distance – small children and babies can’t wear masks. It felt wrong to go; it felt wrong to stay at home. Our friends Taio and Phoebe were in the same boat, with two kids the same age (one of whom is our eldest daughter’s best friend).

A throwaway WhatsApp suggestion by Phoebe on Wednesday night, to go to our local park together with our placards and hold our own family protest, grew by Thursday morning into the idea of organising a protest for children, families and whoever else wanted to come. We decided on the coming Saturday – three days away – and agreed that as long as we could get four families to attend then it would be a success. 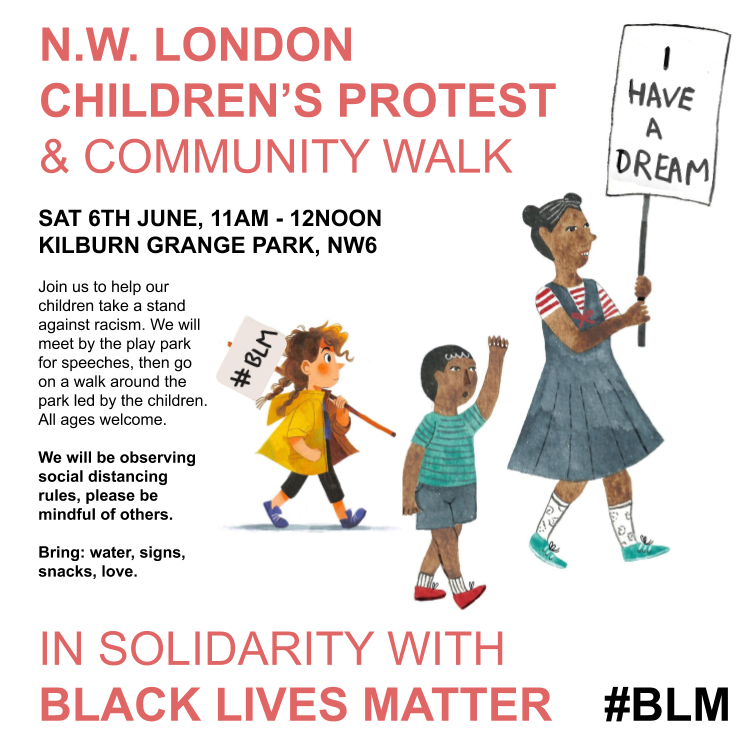 Taio volunteered to speak at the start of the protest, and my partner made us a flyer which gave the event a sudden sense of legitimacy. By that evening we were ready to send it out to friends and to post it on social media. We didn’t set up a specific page for the event, and had no names or contact details on the flyer – so once we’d posted it, we had no idea who or how many people would attend. We sent it to our nursery WhatsApp group; a couple of Instagram accounts (including @Citykidsmagazine!) with large followings; and we got some attention (mainly positive) on local mums Facebook groups. On Friday my two biggest fears were these: What if no-one comes? What if everyone comes?

On Saturday morning the weather was fairly grim. My fear of the protest turning into Woodstock and social distancing being impossible was allayed. It looked far more likely that our protest would be a small gaggle of friends meeting and marching through a rainy, empty park. Phoebe and Taio came round to ours, and we all walked to the park together – as always with toddlers, running a little late.

But as we walked through the park gates, 5 minutes before the protest was planned to begin, we could already see a crowd gathering. Some familiar faces, but mostly people we’d never seen before. More and more people arrived. Small and large families, old and young people, a group of teachers from the school where I work, black, white, mixed heritage. By the time Taio stood on a rock and called everyone to attention, there were around 250 people gathered (at a distance) holding placards and signs, wrapped up in raincoats or with umbrellas. 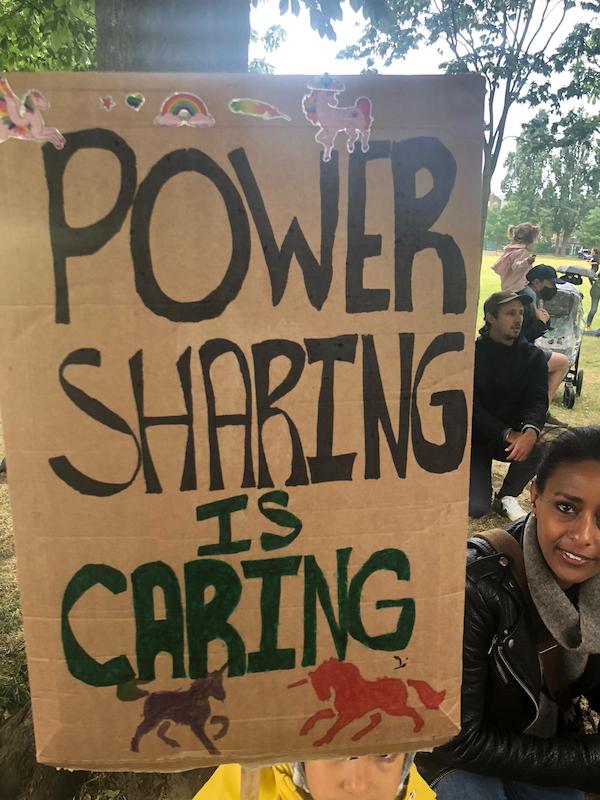 Taio read from James Baldwin, and spoke about the specific fears black parents have for their children. He listed the statistics of the inequalities black people suffer in the UK’s justice system. He spoke about his experience of being black and a father, and his own fears. And then we marched. As we marched, social distancing meant that we formed a ring around the whole park, marching and chanting together. (Our daughter Joni announced she didn’t like all this shouting, and was worried we’d wake people who were sleeping!). Some teenagers walking through the park to buy Lucozade stopped and joined us, as did some people doing exercise. After the march, we knelt together for a minute’s silence. 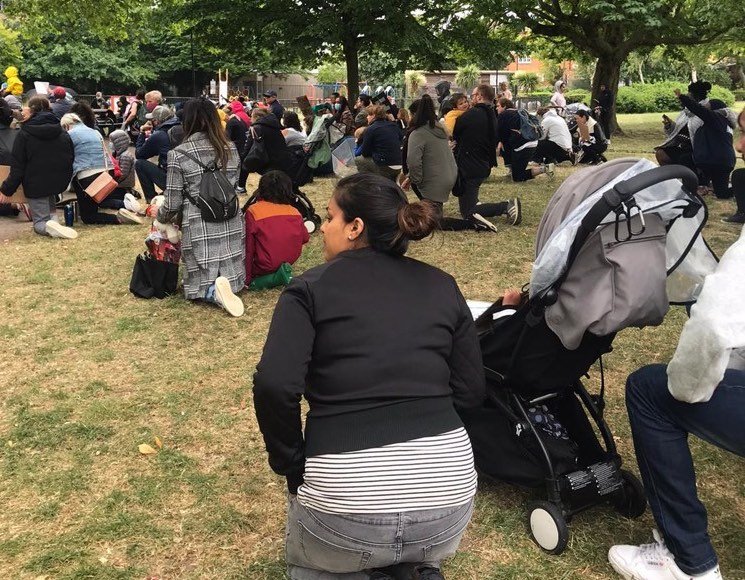 What did the protest do? How did it feel? It felt powerful. It felt joyful. It felt good.

Two things really stood out. One, that very few people in that park knew who had organised it, or who was speaking, and it didn’t really matter at all. People came because they felt the same, because they really wanted to do something and, even though we’re in the middle of this awful, scary pandemic, they wanted to be together.

And two, that despite our surprise at the number of people who came, we were only 250 people, in a park, in a corner of northwest London. The government and the media wouldn’t even know that we’d been there. But we all knew. All the people in that park – and their children – could see that others living around them, felt the same way, supported each other, and are fed up with the way that black people are treated. Black Lives Matter. 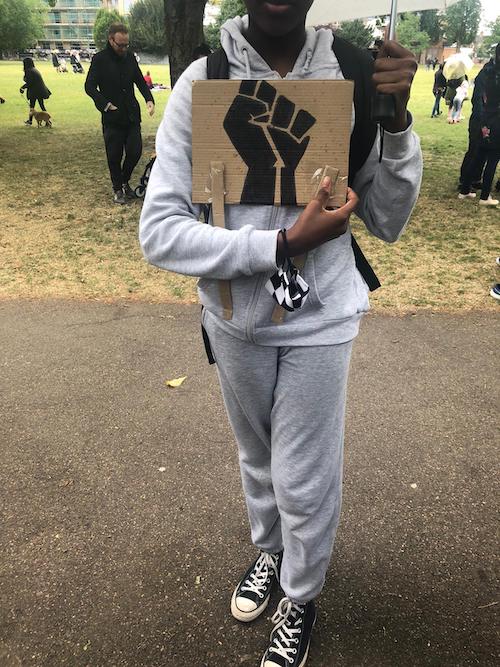 All images courtesy of Amanda Oba