In part two of our interview with Joe Wicks, he tells us about his inspiration and how he’s taken to parenting.

Thirty minutes on the phone with Joe Wicks flies by. What you get is what you see. He is how you’d expect him to be: friendly, talkative, genuine and interested in what you want to ask. There is no edge. And he seems at his most content when he’s talking about his family, whether that be his parents, babies or wife, Rosie. And during lockdown, there’s no other place he’d rather have been holed up.

“Apart from not being able to go for dinner or to the cinema and see our family and friends it hasn’t changed much in the sense that we’re always at home together, you know I do my YouTube videos and my content, recipes and stuff here so we kind of always live in each other’s pockets, even from the start, before we had kids. We’re our happiest when we’re together, we want to be together, so it hasn’t been too difficult.  I’ve actually spent more time with them than ever while being busy. It’s been quite intense but in a positive way. I think we’ve had a nice time, I don’t think it’s been negative for us as a family.

Marley’s almost six months old now, but could you share the recent scare you had with him?
For the first couple of months he was so needy, he didn’t want to be left alone and we didn’t know if he had reflux or colic. But then it got to the point where  we realised he could never make eye contact with you. He would look to the right or to the left of you, never at you. It was this thing called delayed visual maturity and so he was always crying, you couldn’t put him down, he was blind as a bat basically. He was in a black room all on his own, he didn’t know where we were. One day, it was like the light went on and he could see and he’s become a different kid – it’s changed his personality.  He’s more relaxed, he’s got this wonderful energy and he just smiles and he just wants to be looked at and smiled at, he loves it so much. I fully accepted that he could have been blind, 100%, I said we’re going to love him the same, it’s not going to change our world, we’re going to look after him and be there for him and as it turned out he was fine and we didn’t need to deal with that. It was definitely scary and upsetting.

Indie’s a good big sister?
She loves him. She was really jealous of me being with him but now she’s cool. She understands he’s there and she knows he’s her little brother. I look round and she gives him his dummy and kisses him on the head and she wants to hold his hand. It’s an amazing thing to see, I love how nurturing she is. She’s very maternal and she looks after him like he’s her baby it’s so cute.

Indie’s often seen with you training, what activities does she enjoy?
Indie goes to The Little Gym and she did go to Gymboree but that’s now closed but she loves all those activities and I’d love to take her to ballet and horse riding. I’d like her to try everything, have a go at karate, at skateboarding to see what she loves really and try to encourage her to be creative and active and whatever she finds her love for I’ll obviously encourage. 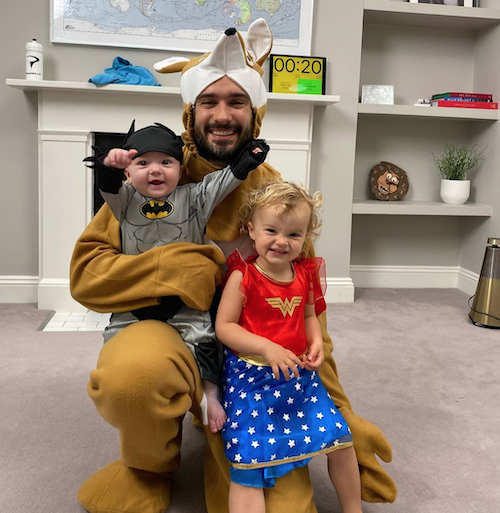 Are you a strict dad? Do you deal with tantrums well?
I try to be really patient with her, so we don’t shout and swear we try to be really calm around her. She’s challenging, she’s tough, we do have our moments. I think I’m a bit of a softie when it comes to it. She always wants fruit so she comes up to me and says “ a strawbee, as strawbee” and I can’t help but just give her one – I love seeing her little face light up and getting a kiss and a cuddle when I give her a strawberry. But I definitely need to stop as she knows I’m a bit of a softie, I’m a bit of a pushover. I just can’t say no, I just love her so much.

You’ve been through tough times and shown resilience when your business was getting off the ground. But you had the confidence and resilience to carry on. What’s the most important life skill you’d like to pass on to your kids?
I think being kind and positive are amazing traits to have. When you’re considerate of other people, whether at school or at work, whether you’re in hospital, how you treat the people who look after you and are around you, that’ll be the most important thing I can teach Indie: kindness to everyone, either that’s being polite and sharing with kids in nursery or wanting to just be friendly and welcome new kids to the class. I really hope that those are the things that she picks up from me and Rosie. I think me and Rosie are quite similar in that way, we’re not judgemental, we’re quite open to people and her personality is quite open.

And who has shaped that open nature of yours?
My mum definitely. She had quite a strict upbringing. She left school when she was young, got kicked out when she was 15, so how she raised me and my brothers to be who we are I really don’t know. My dad was in and out of rehab, he was a heavy drug addict and he wasn’t there, he wasn’t a role model. But my mum was. We always knew rules, we always understood what was right and wrong and we always respected her. She taught me how to look after my room, how to respect my clothes and my house and that means soemthing. When I look back now I realise that we had our difficult times during the teenage years, we obviously banged heads and stuff but she wanted the best for us and without doubt, she taught me to be loving and caring and she shaped the person I am, no doubt in my mind. But later on in my adult life, my dad is obviously a good role model and he’s there for me as well. 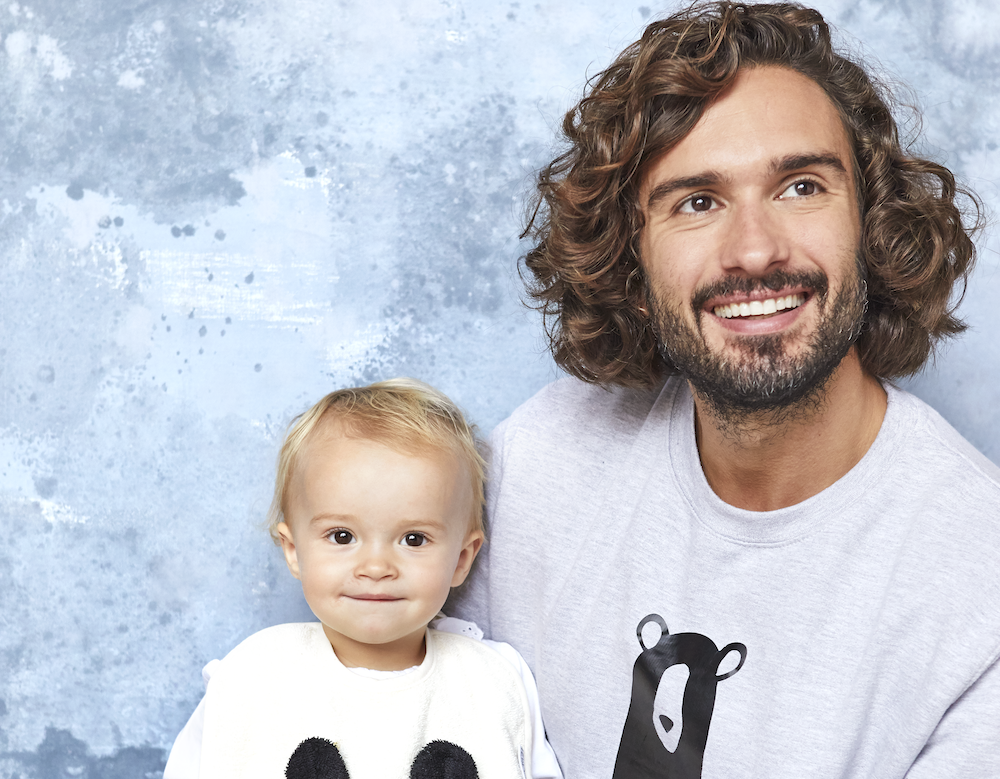 Image Maja Smend from Wean in 15

Do you worry about the world that your children will be growing up in?
More so than ever. Especially around the environment and the impact on the oceans and the forests. Seeing plastic in the ocean breaks my heart and the animals and the wildlife getting squeezed out of their natural habitat, it’s depressing if you think about it. It’s hard to accept what’s going on and to realise as a human race we’re moving too quick and we’re destroying too many things. And now with everything that’s going on with equality and racism I want to make sure that I am being diverse in my life with Indie so she experiences that and so she doesn’t have any prejudices when she grows up.

You recently got into meditation. Does it help with the stresses and strains of running a business and parenting?
I did Russell Brand’s podcast Under the Skin and he said just give it a go, I think it will really benefit you. I gave it a go every day for a couple of weeks and it really opened up my mind about leaving my phone and being present and having a little moment to breathe. I’d be lying if I said I do it every day but I do it maybe three or four times a week and on those days I do it, even if it’s ten minutes, it just centres me a bit, grounds me and gets me present cos I’m always on this conveyor belt of work, this hamster wheel that never stops turning. I really do enjoy it. I always said I’m too busy to do it, I’m mindful but I can’t be mindful, but you can. It’s like training. Some days you do a work out and it’s sh*t and other days you love it and feel really good and it’s the same thing with yoga and meditation, just good practice and bad practice.

Before we go, what would be your best advice for new parents?
You have to go to bed when your kids go to bed, not every night cos that’s not going to happen. You’ve got to put them in bed, have your dinner early and then get straight in there with them, go to bed and if you can get that extra few hours sleep. If you stay up til half ten or eleven, and you’re getting woken up you can’t catch up so you have got to sacrifice sometimes you need to get to bed a bit earlier and you’re going to  feel much better at the end of it.

You can find part one of our interview with Joe here. 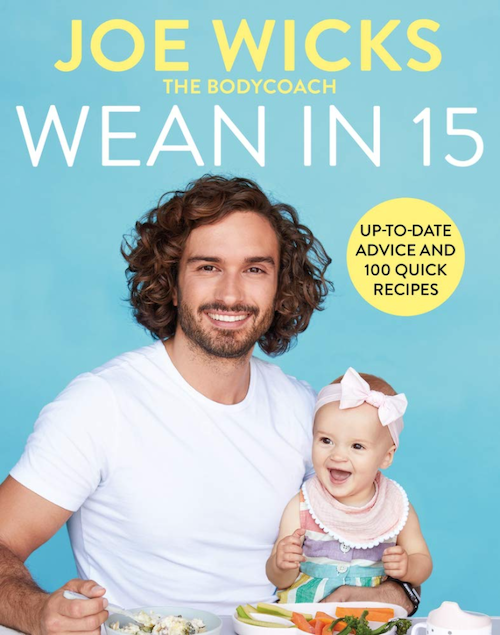