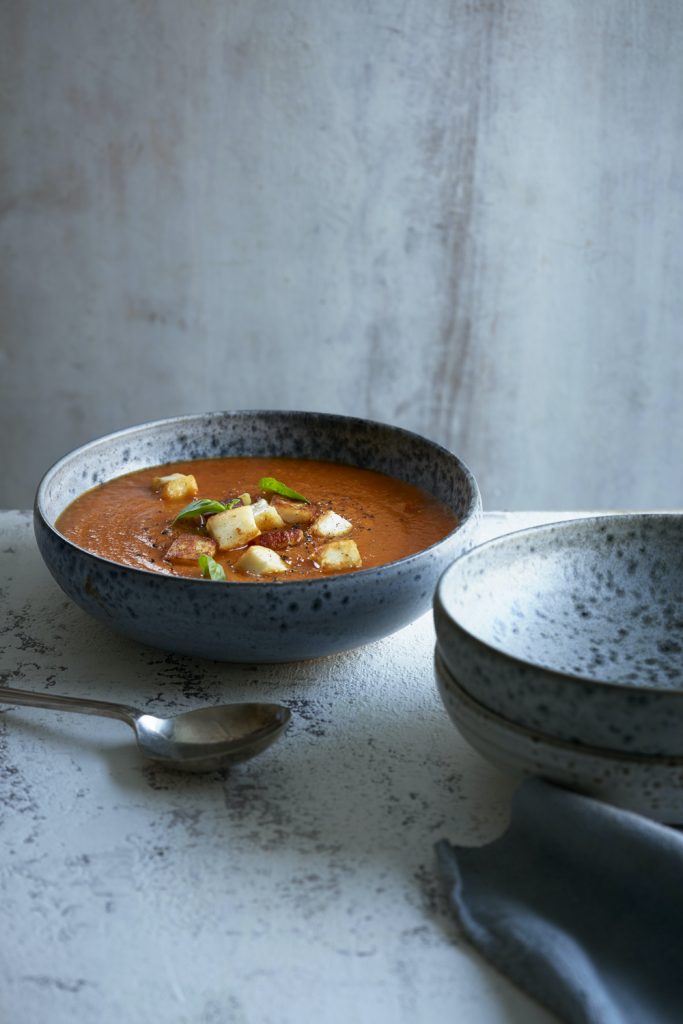 Celebrating tomatoes with Jo Pratt’s Roast Tomato and Lentil Soup with Halloumi Croutons is a fine way to mark British Tomato Fortnight. It’s one of our favourites from the City Kids Family Food Planner too.

Put the tomatoes, pepper, carrots, celery, chilli, if using, and garlic in a large roasting tray, one that is suitable to be put on the hob as well as the oven. Drizzle with the olive oil, sprinkle over the paprika and season with salt and pepper. Toss to coat the veggies in the oil and roast in the oven for about 40 minutes, turning once or twice, until the vegetables are all softened and beginning to char nicely around the edges.

Remove the tray from the oven and stir in the lentils and stock. Place the roasting tray on the hob and set over a high heat. Bring to a simmer. Cover with foil or a baking sheet, reduce to a low-medium heat and cook for 15 minutes until the lentils are tender.

Blend the soup with a hand blender or liquidiser until smooth. If using a liquidiser, it may need to be done in two batches, depending on the size of your machine. Check for seasoning and serve hot.

To make the croutons, heat a drizzle of olive oil in a non-stick frying pan. Add the halloumi and fry for 2–3 minutes, turning throughout, until golden on most sides. Serve hot scattered on top of the soup along with the basil leaves.

Vegan –  the soup itself won’t need any alterations to be vegan friendly, but as an alternative to the halloumi croutons, lightly fry a mixture of cashew nuts and pumpkin seeds in a drizzle of oil until golden. Sprinkle over a pinch of smoked paprika and salt. Toss to coat and serve scattered on top of the soup.

Dairy-free –  for dairy-free meat eaters, replace the halloumi by frying some sliced chorizo in a drizzle of oil until golden. Sprinkle over the soup with a drizzle of the rich red chorizo oil from the frying pan.